My youngest daughter was a glorious two-year-old.

Curly hair, bright eyes and a grin that you couldn’t resist. She was what day care workers and babysitting friends called a delight; happy to play with others but just as happy on her own, calm, easy-going, placid and giggly. A darling, a gem, a sweetheart and the apple of my eye.

What happened? I hear you ask. You’ve probably picked up on my use of past tense, you clever things. I will tell you, dear reader, exactly what happened. 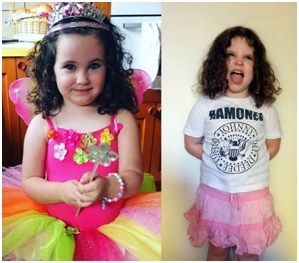 Two of the many faces of the average Threenager –
Photo credit: Amy Ahearn

It was a gradual thing, this threenagerdom. She went to bed as a darling of a two-year-old and woke as a darling three-year-old. The real change didn’t happen overnight; I think it’s taken maybe two months or so to kick in. But kick in it has. I mean, she had her moments at two. Don’t they all? But they were just moments and they weren’t all that frequent.

Three year olds, however, are an entirely different species to two year olds at times. The moments my darling had at two, she still has. But at the age of three, they last longer and happen far more often. At three, it seems, humans start to develop all the big emotions and then begin experiencing them. Often simultaneously. All of that happens in a body and mind still too little to cope with them rationally. So, irrational it is!

Take last week, for example. My sweet little girl had a delightful meal of fettuccine bolognese. It was packed with hidden vegetables that were further disguised by a light layer of cheese. It went down a treat. I smugly congratulated myself; I’d made enough so that the next night, I would just have to reheat leftovers. 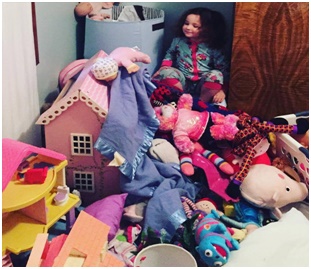 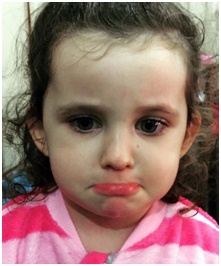 She has perfected the pout – Photo credit: Amy Ahearn

Instead, I made sure she was safe for the moment and stepped outside. I had grabbed my mobile and quickly phoned my best friend for a small vent. I quietly explained the dinner dilemma.

“The pasta, she says, is too square. It’s inedible.”

“It’s exactly the same as what she scoffed last night?” she asked.

“Yes. But tonight, it’s rat poison. Because square. ” I may have raised my voice ever so slightly and looked to the heavens when saying this.

“Because square?” she asked.

Yesterday, the issue was somewhat different. “Come here, sausage!” I called to her. Sausage has been her pet name for some time due to her fondness for sausages and love of rolling around as if she is one. Cute, right? In this instance, I was harshly corrected. In an angry voice, I was informed that she is not, in fact, a sausage. She is a coconut. 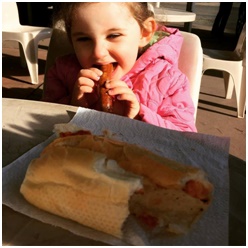 You are what you eat… but she is NOT a sausage! –
Photo credit: Amy Ahearn

What kind of mother doesn’t even know her child is a coconut? This one.

I’m not the only bad parent here, though. The other day I was met at the bathroom door (I had the temerity to close it for less than two minutes’ privacy) by a wailing threenager who was devastated because her brother talked to her. He has some nerve, that guy.

Despite all the mood swings, I love this age. At 3, they are starting to strive for independence but they rely on you to show them how to do things. They are funny; not always on purpose but this kid has me in stitches most days with her antics. And their emotional outbursts are sometimes heart-burstingly lovely rather than exercises in frustration. My threenager has been known to stop mid-swimming lesson to call out “Mummy! I love you SO MUCH!” before grinning and carrying on.

Every age group has its challenges, (and as a mum with teens in the house, I know this only too well!) but threenagers certainly also have their own rewards.

Amy Ahearn is a shift-working mum and step-mum who fills in her few spare moments by throwing her thoughts and opinions at the Internet with reckless abandon and questionable aim. Her blog is www.handbagmafia.net