Prime Minister Tony Abbott’s government thinks single parents and unemployed people can’t be trusted with their own money.
So the Minister for Social Services, Scott Morrison, is rolling out a Centrelink Eftpos card that places limits on what you can spend your money on.
And strict limits will be placed on how much money can be withdrawn from ATMs. So can you live without cash?
By Jason Bryce | 26 March 2015
Share 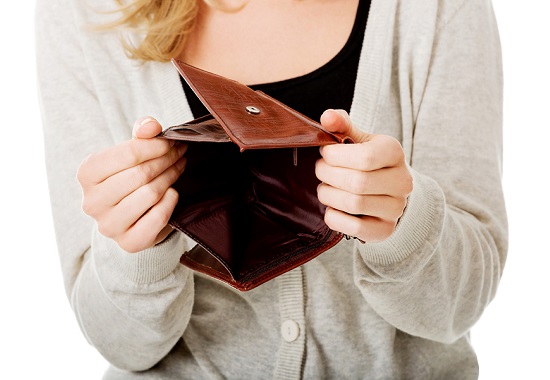 Could you live without cash?

Before the end of this year, you could be getting your Centrelink payments, like Parenting Payment, Newstart and Family Tax Benefit ‘income-managed’ by the government.

Sounds ominous doesn’t it? It is.

‘Income-managed’ means restrictions are placed on what you can purchase and the amount that can be withdrawn as cash.

The new “Healthy Welfare” income management Eftpos card for Centrelink payments will give you little (or even no) access to cash and you will not be allowed to buy alcohol. Gambling will also be banned for you.

The federal government has announced that it will trial the new Healthy Welfare Eftpos card in a small number of locations in 2015. The plan is to eventually roll it out across Australia. This isn’t just for remote indigenous communities like the original income management project, called BasicsCard. This is across the board for all single parents and unemployed people. And there may be far less cash available under the new Healthy Welfare card than the old BasicsCard.

Your Centrelink payments will be paid into your account linked to the card. Everything will work the same as it does now, until you try to buy a bottle of wine to go with your dinner. That purchase will be rejected.

Or until you tell your date that you will pay for your own vodka and orange thanks. That is not allowed. And if you want to shout your BFF a beer? I don’t think so.

Don’t try to buy a lottery ticket, a scratchy or visit the pokies. That is also out of bounds for holders of the Healthy Welfare Card.

You may not even be able to get coins to pay for parking metres, school tuckshop, shopping trolleys, the Laundromat or kids pocket money.

Alan Tudge is parliamentary secretary to the Prime Minister Tony Abbott. Alan is currently working out which suburbs and towns will be first for the pilot trial program of the new income management system.

Communities where there are ‘high rates of welfare-fuelled alcohol and drug abuse’ will be prioritised, Alan Tudge told Fairfax Media. 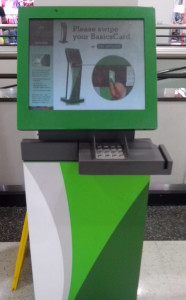 BasicsCard terminal in Chester Hill, Sydney
Photo credit – www.goughlui.com
He’s talking with community leaders looking for support to introduce the program which is a big step forward from the BasicsCard. The BasicsCard can only be used at a limited number of merchants. It is not a standard bank issued Eftpos card.

It began life as part of the Howard government’s Northern Territory Intervention into Indigenous communities. The BasicsCard was later rolled into suburbs, cities and towns by the Rudd and Gillard Labor governments.

This new card – the Healthy Welfare card is the brainchild of iron ore mining magnate Andrew Forrest who wrote a government report recommending this last year.

Forrest says that BasicsCard holders have too much access to cash and the new Healthy Welfare card will fix this ‘flaw’.

The BasicsCard allows people to have “often more than $30 a day” in cash, Forrest wrote in News Limited newspapers this week.

Forrest said the Healthy Welfare Card will fix that by having

“little to no cash component.”

Alan Tudge admitted to the ABC that parents do need cash for some things.

Andrew Forrest is more hard-line. Speaking to Radio National, Forrest said if cash is available, it will go straight to drugs and alcohol. The BasicsCard allowed 50 per cent cash said Forrest and that 50 per cent went to illicit substances and alcohol.

The Forrest plan is a long way from what was promised when this government came to power. Increased payments for single parents were reportedly being considered by the previous minister for Social Services, Kevin Andrews.

Two weeks after the 2013 election, Andrews was said to be looking for ways of creating a more generous income test for parents on Newstart. That hasn’t eventuated and now under new minister Scott Morrison, Andrew Forrest’s radical approach to welfare reform has the momentum in Canberra.

Thirty seven charities and welfare organisations have written to the minister opposing the new Healthy Welfare Card proposal. The charities issued a statement saying that all Centrelink payments should meet basic living costs, be based on need, support employment participation and respect people’s dignity.

However, said the charities, the Healthy Welfare card proposal is demeaning, unworkable and creates a sub-class of millions of Australians that “can’t be trusted” with their own cash.

The charities say the BasicsCard has only been successful with people who have volunteered to participate in that program. Otherwise, the BasicsCard has been a high cost failure and has not prevented people buying drugs and alcohol.

Nevertheless, the Healthy Welfare Card is coming soon and maybe coming to your purse sooner than you think. Soon you may have to learn to live almost completely without cash.
Jason Bryce
Business & Finance Journalist