The SingleMum.com.au Poll results are in:

The Poll results are in: 99% reject Abbott’s description of the Schoolkids Bonus – And seven mums vote for taking the cash to the pub!

Ninety nine per cent of single mums have completely rejected the prime minister’s “beer and skittles” description of the Schoolkids Bonus which flows into bank accounts from the end of this week.

Most parents say school expenses are much greater than the bonus payment and plenty of mums are insulted by Tony Abbott’s remarks.

1.3 million parents who receive Family Tax Benefit part A will get $410 per high school aged child and/or $205 per primary school aged child paid directly into their bank account in the fortnight starting Friday 3 January. A whopping ninety five per cent of parents in our poll said they will spend all of their Schoolkids Bonus on school expenses.

Another four per cent will spend the cash on household bills and food according to the poll of over one thousand parents.

Just seven parents say they will spend the cash on “beer and skittles” – or entertainment and luxuries.

Or maybe that should read: Seven parents have admitted they will spend the Schoolkids Bonus on beer and skittles.

Previously Tony Abbott has described the Schoolkids Bonus as a “cash splash” and a “handout” that has “nothing to do with education.”

Maree O’Halloran, President of the National Welfare Rights Network said most parents do their very best for their children “and many would find this talk of ‘beer and skittles’ to be offensive.”

Single mum Vanessa Wright from Chirnside Park in Victoria confirmed that her children do in fact eat Skittles. 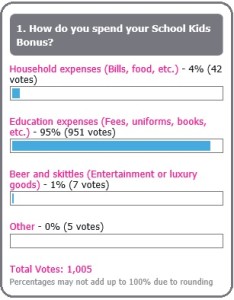 Vanessa said all of the $615 she will get in her bank account soon will be spent on school expenses for her two kids, but mostly on her daughter who is heading to high school.

“It’s going to end up costing fifteen to eighteen hundred dollars to start my daughter in year seven in a public school this year,” said Vanessa.

“At lower incomes, the Schoolkids Bonus can really help kids have the same uniform, the same stationery as the other kids and of course activities for kids cost money.”

“Tony Abbott has no idea,” said Loretta Kelly from Ballarat.

“We are not all sitting on the pension. I’ve retrained three times to get reliable work and my (two year old) daughter is sometimes in care eleven and a half hours per day while I work and travel.”

Loretta has a daughter in Year 12 this year and says the Schoolkids Bonus will not cover the cost of books.

But the Schoolkids Bonus was better when it was known as the Education Tax Refund and required parents to produce receipts to claim the cash said Loretta.

“I know it’s hard to pay for things up front and wait to claim money back but then no one could say you weren’t spending the money correctly.”

Parents on the Single Mother Forum Facebook Page voiced their suspicions that the 2012 repackaging of the Schoolkids Bonus from a “Refund” to a “Bonus” was a planned move that allowed the government to more easily dismiss the payment as a temporary bonus, rather than a bona-fide tax rebate.

Alexis Hill from Frankston in Melbourne is a single mum with two boys aged seven and eight. Alexis wants to know “How do they wear out shoes so fast?”

So some of her $410 Schoolkids Bonus payment is going on new shoes with uniforms and books taking a big chunk.

“I’ll try to put a little aside for their expenses through the school term,” said Alexis.

Alexis doesn’t like politics generally but disagrees with the prime minister’s comments about the Schoolkids Bonus.

“I think Tony Abbott has been adding to the stigma of being a single parent,” said Alexis

“Ninety per cent of parents do the right thing.”

And ninety nine per cent of parents who read www.singlemum.com.au do the right thing.

Have your say on this story – do you think the government should keep the School Kids Bonus? Make a comment below!