Hundreds of single mothers completed our online survey on Tony Abbott’s ‘Healthy Welfare’ income management plan for Parenting Payment and Newstart recipients.
The results may surprise you – but the government’s response could shock you. If you think you are a responsible parent and you won’t be income managed, think again. 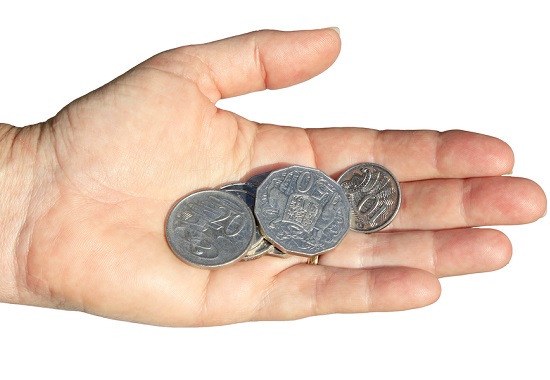 The overwhelming majority of single parents spend nothing on alcohol or gambling products and need more than $30 cash per day to manage their families.

However single parents face severe restrictions on the amount of cash they will be able to withdraw from their Centrelink benefits under the new Healthy Welfare income management policy, commencing trials shortly. Single parents and unemployed people will also not be allowed to use their own Visa debit card to buy alcohol or gambling products.

However, more than half of our readers say they support the Abbott government’s Healthy Welfare income management policy, but only for volunteers and addicts. And that is a very big but.

Our exclusive online opinion poll has attracted over 550 completed responses to date. Thanks to all the readers who took the time to answer our four questions on income management.

The most controversial part of the Healthy Welfare plan is the severe restrictions on cash withdrawals. About $30 cash per day could be the limit that a Healthy Welfare enabled debit card will allow.

Just six per cent (5.6 per cent) of our survey participants replied “Yes” when asked “Do you think income management of Parenting Payment and Newstart is a good idea?”

A whopping 52 per cent of Singlemum.com.au readers said they support income management for people who volunteer for it or who need help to deal with alcohol or drug addictions.

Altogether, almost 58 per cent of our readers expressed some level of support for the Abbott government’s income management plan. 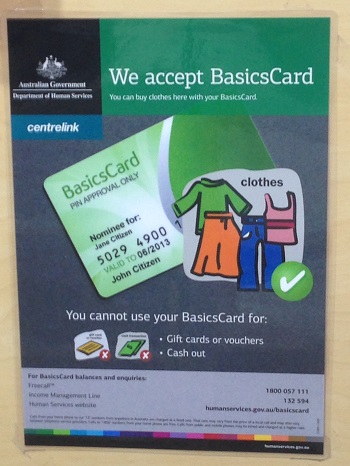 Centrelink Basics Card sign at a NSW city Best and Less store
However, said Dr Goldie, there is no evidence that the existing income management policy, the Basics Card, actually works in preventing alcoholism, drug addiction or gambling. The Basics Card has also not helped get people off welfare.

“There is no evidence to date to demonstrate that it has any long term effect in people’s behaviour,” Dr Goldie told Singlemum.com.au.

“In fact, this was clearly stated in the leading evaluation.”

That government evaluation concluded the Basics Card is operating as a ‘control or protective mechanism’ rather than increasing capability.

“Clearly $30 a day in cash is not enough,” said Doctor Cassandra Goldie “We completely agree with the single mums”

“They are the experts on how much they need to survive, they should know.

“We are very far from being a cashless economy, and many discount and smaller retailers will only accept cash payments.”

Melbourne based single mother Yvette Scholtmeyer has six children and said she does very little shopping in big supermarkets.

“I have a green grocer / mini market near me where I spend my money on vegies etc.”

“It is much cheaper – but has a $10 minimum on card purchases,” said Ms Scholtmeyer “My methodology of shopping would be shattered and there would be no more markets etc…” 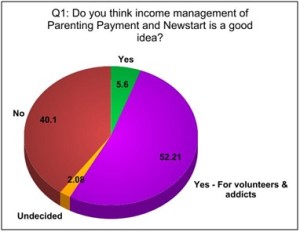 Singlemum.com.au Centrelink income management results
“I feel it would trap my money at Coles.”

Single mum Yvette Scholtmeyer said she spends about $10 on a “cask of chateau cardboard.”

“I have a glass of wine as I cook dinner,” Ms Scholtmeyer told Singlemum.com.au.

“And it is horrible that I should even feel mildly defensive about that.”

Gambling is even less of a drain of single parent budgets than beer and wine, according to our survey. In fact, almost no single mums spend money on gambling.

Just under 95 per cent answered ‘$0’ when asked:”How much do you spend on gambling (including poker machines, lottery tickets, scratch tickets, online gambling, horse races, phone betting) per fortnight?”

Just four per cent said they spend between $0 and $50 and only seven mums (0.9 per cent) admitted to spending more than $50 per fortnight on gambling.

By any measure, that is impressive budget management by single parents.

“This does not surprise us at all,” said Dr Goldie.

“We know that most single mums are very effective money managers because in most cases there’s very little to go around.

“They have to make choices every day to provide for their children’s well-being,” said Dr Goldie.

“They are doing their very best to raise their children well and give them the best possible chance in life, just like most other parents in our community.”

Just because you don’t spend much money on alcohol, drugs or gambling doesn’t mean you won’t be placed on income management.
We provided these poll results to Alan Tudge, Tony Abbott’s parliamentary secretary now in charge of the Healthy Welfare income management project, and asked for his response.

“Unfortunately Mr Tudge is unavailable as he is busy with parliamentary business,” said his media adviser.

However we do know bits and pieces about the Healthy Welfare plan from Mr Tudge’s previous public comments. And you may not like to hear what he has revealed so far about Healthy Welfare.

Just because you don’t spend much on alcohol, drugs or gambling doesn’t mean you won’t be placed on income management.

Adelaide radio 5AA host Jane Reilly asked Alan Tudge if the Healthy Welfare program is just for people with a problem or for people who can’t handle their money.

Alan Tudge tried to avoid giving a direct response but the short answer seems to be no, it is for everyone, even people who spend nothing on grog, drugs or gambling.

Mr Tudge said responsible parents who don’t take drugs, who don’t buy much alcohol and are not big gamblers will still need to “reach for your card and tap it.”
If you live in one of the trial communities selected by the government, it seems likely you will have a Healthy Welfare card assigned to you.

Tudge said the only impact on responsible parents from the Healthy Welfare card will be that instead of reaching for cash, you will reach for your card instead. 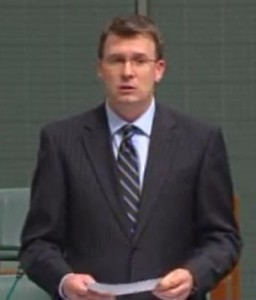 Alan Tudge, the MP in charge of income management
was “too busy” to reply to us
The trial communities will be areas where, according to Mr Tudge, there are high rates of alcohol and drug problems These will not all be indigenous communities. Some trial sites will be non-indigenous towns and suburbs.

There will be a small amount of cash available through the Healthy Welfare card, “but we haven’t determined the precise figure yet,”Mr Tudge told radio station 5AA .

We do know it won’t be very much cash because Tudge also said “the cashless component does need to be pretty high” to prevent people buying drugs and alcohol.

Healthy Welfare’s architect, Andrew Forrest recommended no cash at all.

“I don’t reckon that $30 per day is going to happen,” said Yvette Scholtmeyer.

Even, apparently, for those people who don’t spend money on drugs and alcohol.

You can read the complete report of our Singlemum.com.au Centrelink income management Poll here

Have your say on this story – do you think it’s reasonable that responsible parents are also to be placed on income management? Make a comment below!