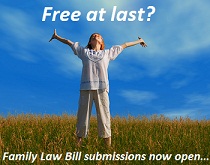 How to submit for dummies!

It’s the current no.1 family law issue on everyone’s lips – on the street due to the recent Darcy Freeman tragedy judgement, all over the media, and the number one discussion topic of the single mums in our sister website, the single mother forum – how do we protect our kids from ongoing domestic violence and child abuse in the Australian Family Court system?

You can help to change the current family laws that prioritise parents’ rights over children’s in court – by making a submission to the “Senate Legal and Constitutional Committees”. That is, if you have something to say about the way your child/ren were treated in court or through family law process that resulted in risk to your child, get typing or writing by the following methods…

Already submitted to the enquiry months ago?
You need to submit again – this is a whole new round

That’s it – this is a fast process, only a month to submit this time around with the senate report being released on 23 June 2011.
We recommend is that you read the offical Senate website article (copied below), and located here

On 25 March 2011 the Senate referred the Family Law Legislation Amendment (Family Violence and Other Measures) Bill 2011 for inquiry and report.

The bill makes amendments to the Family Law Act 1975 to prioritise the safety of children in parenting matters where children and families are at risk of violence and abuse. The bill also makes several technical amendments which seek to correct drafting and minor policy matters, and provide other efficiencies for the courts and litigants.

The Committee is seeking written submissions from interested individuals and organisations preferably in electronic form submitted online or sent by email to legcon.sen@aph.gov.au as an attached Adobe PDF or MS Word format document. The email must include full postal address and contact details.

Alternatively, written submissions may be sent to: