Single Mums – this is your chance to be heard! With our national network of hundreds of thousands of single mums, it’s time to band together to vote on the issues that so harshly affect Aussie single mums – Newstart, Single Parent Payment, Child Support, The Cashless Welfare Card, Third Party Verification and much more. Look closely at the table below and let it be your guide on how you vote for what matters most to you and your single parent family… 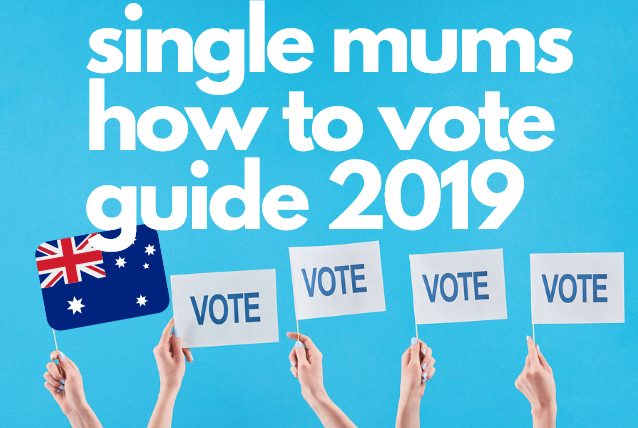 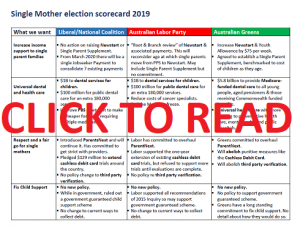 Federal Election 2019 – a chance for single mums to be heard

The election is just around the corner. For some it will be a relief whilst for others it could be the winds of wanted change.  The election is a contest of ideas it gives insight into what are the focus and priorities of the political parties.  I have heard the call, don’t vote!  I can never support this call; a passive puppet we are not. But mostly it feels a betrayal to the women who used every part of their resolve to gain the vote for women. These women were shunned by our community, their children were removed, they were thrown in jail, they were tortured and became destitute.

We did a quick survey, it was really a touchstone to ensure that our scorecard was on the mark and that the issues were of significance to single mothers. It also allows us to project our voice post the election with the validation that can come when we are standing together. It was a tough survey as respondents were asked to tick the ‘four issues that mattered most to them’.  Often all the issues mattered, some were interconnected, some of the issues were about the day-to-day lives while others were big picture. For those who took up the challenge we are thankful, and you’ve given us some clear guidance.

Despite the usual priorities such as income support due to the entrenched hardship for single mums the unfairness of a failing child-support system and the lived reality of managing housing stress – another big-ticket was the ‘surveillance’ of single mums.

Imagine for one minute if women had access to funds that were used to manage and direct their life. It’s hard to quantify the importance of living with dignity and not judgement.  Perhaps Jacinta Adern with her first well-being budget might provide some guidance to Australia.

•             There was never any need for the increased penalties of the third-party verification.  A trip back to the 1970s to cherry pick the dark elements of power imbalance. There is no need to replicate the sense that if you are requiring the support system to operate as it meant to that suddenly you are “dishonest”.  This is mean and damaging messaging to the Australian public.

ParentsNext should be scrapped

•             The Senate Inquiry has shown the harm of ParentsNext and the chorus of calls for it to be voluntary or scrapped were not heard. The outcome was some minor tweaking. If the pundits are correct and there is a new government, we will quick in seeking clarity and action upon the promise to “overhaul the program”.

The Cashless Debit Card should not be compulsory

The sting in the tail is when women then receive letters that confirm the amount of child support that is owing. Shhh, there is no child support policy from the major parties, and it appears that they are not concerned about the non-lodgement of tax returns for child support payers. It is tax evasion and will be breaking our silence again and again.

Enjoy the sausage sizzle, make your vote count and please read the scorecard carefully – it’s a product of your voice – of what you want. 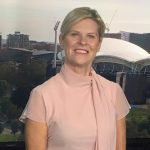 By Terese Edwards, Chief Executive Officer of the National Council Single Mothers and their Children