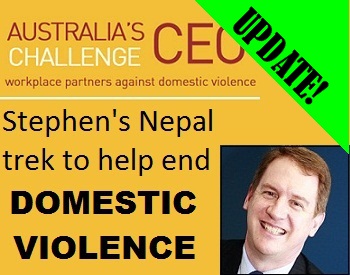 Our Singlemum.com.au Expert Opinion Panel legal contributor Stephen Page left Australia on 17 September leading a group of would be trekkers bound for Nepal. The travellers are trekking to aid the tiny but award winning domestic and workplace violence charity Australia’s CEO Challenge.

When Stephen is not a busy family lawyer with Harrington Family Lawyers in Brisbane, he is out pursuing his causes, which are all about ensuring that people are treated equally and with dignity. Stephen is passionate about being a family lawyer, because it is all about helping people, especially giving clients a sense of self-worth and dignity.

It is for these reasons that Stephen has for over 20 years been active in helping stop domestic violence and for the last 19 years helped LGBTI clients.

Stephen got roped into the trek because of his role as Deputy Chair of Australia’s CEO Challenge. Despite everyone else on the trek, including several refuge workers, being extremely excited to go, Stephen was not. “I have asthma and a fundamental fear of heights. Somehow I have been talked into trekking up mountains in Nepal. Go figure! We all have fears to conquer, and this will be part of my process. Women who are separating from violent partners are some of the bravest people I know. My fears pale into insignificance compared to theirs. They inspire me,” Stephen said.

Stephen aims to learn more about how women are treated in Nepal and Thailand and about how LGBTI issues are tackled. “According to all reports, domestic violence in Nepal is terrible. I hope that these reports are wrong,” he said.

More can be found out about the trek here: http://www.everydayhero.com.au/stephen_page or at Stephen’s Facebook page http://www.facebook.com/pages/Stephen-Page-Lawyer/152122584877146 and Twitter feed: http://twitter.com/#!/stephenpagelaw