Hundreds of thousands of single mums reap windfall in payments 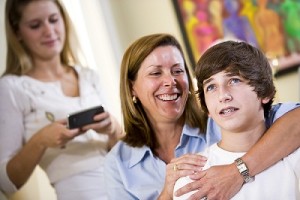 A historic change has been made to family payments and it is now delivering thousands of dollars to millions of teenagers.

Plus other big increases and changes to eligibility for scholarships and ancillary benefits have now come into effect.

Some families are now getting $162 more per fortnight, per child, compared with their final family tax fortnightly payments of 2011. Those families didn’t ignore recent letters from Centrelink’s Family Assistance Office and they switched their teenagers from youth allowance back to family tax part A.

They are taking advantage of the historic shift in the age limit for Family Tax Benefit Part A from 16 years old to 19 years old.

Family Tax Part A is a payment made to low and middle-income parents of children still at school. Since the days when that payment was called “Child Endowment” and paid by cheque from the Department of Social Security, it has put food on the table for millions of single mums with school kids.

In years gone by millions of kids have left school at 16 (when their child endowment/family tax part A stopped coming in) to help their mums financially.

But that has to happen no longer. No child need leave school at the end of year 10 anymore because their family needs money. Single parents can now encourage their children to go as far as they can in school and further education, safe in the knowledge that financial support will be available if required.

This is a truly good news story for millions of Aussie kids and their families.

“From 1 January, the maximum rate of Family Tax Benefit Part A for dependent 16 to 19 year olds still studying full-time at school will increase by up to $161.42 to $214.06 per child per fortnight,” said Hank Jongen, Centrelink General Manager.

“Rent Assistance and the Family Tax Benefit Part A supplement of up to $726.35 for each eligible child may also be available.”

In the last few months of 2011, Centrelink sent letters to more than 630,000 families, asking them to decide between youth allowance and family tax part A for their teenage students.

Youth Allowance is up to $161 per fortnight less than Family Tax Part A but is often paid directly to the teenager. If the teenager agrees, it is paid to their parent.

Families had to respond by the 15th of December for the new payments to begin from 1 January but if you have been sitting on letters from Centrelink, be assured it is in your interest to respond as soon as possible.

Teenagers actually cost more to feed, clothe and house as they get older said Jenny Macklin, the minister for families back in November when the change was finally announced.

“So families will receive up to $4,200 extra a year to help with the cost of raising teenagers who are still at school,” said Macklin. This had been an election promise by Julia Gillard and despite the huge expense she nevertheless was determined to honour this one. Opposition leader Tony Abbott criticised the change on Sydney radio station 2UE last month.

Abbott then pointed to a Howard government initiative to keep kids at school.

“I mean, one of the great initiatives of the Howard government was to try to foster these school-based apprenticeships to try to get back to a considerable extent towards, if you like, technical high schools, “And I guess I’d want to carefully study this and make sure that the right kids are getting the money and that we really were keeping the right kids at school, because if you’ve got the wrong kids at school it can end up like a glorified occupational therapy, basically.”

Macklin was quick to respond to Abbott’s apparent insensitivity.

“He is saying that only certain children, only the ‘right’ sort of children, should stay on in secondary school and other children should go out to work. Mr Abbott really needs to explain … which of these teenagers don’t deserve support.”

Meanwhile, the government has decided that parents who underestimate their annual taxable income to get a fortnightly Family Tax Benefit Part B payment do not deserve it’s support anymore. For the first time, middle and high income families will lose the right to estimate their future income.

If you didn’t qualify last tax year for FTB Part B fortnightly payments, you won’t be eligible next tax year. The household income limit for this fortnightly payment is $150,000 per year. Some families with incomes around this figure have traditionally underestimated their future earnings in order to qualify, then repaid any debt owing at tax time.

From July 2012, the fortnightly payment of FTB Part B will be limited to families who were actually under the income threshold for the previous two financial years.

Students from families under the $150,000 threshold, who live outside of a major city, can now also qualify for the federal government expanded Relocation Scholarship, if they move away to study. Previously available only to students from very remote country areas, the scholarship is a lump sum payment of $4,000 in first year, $3,000 for years two and three and $1,000 per year after that. Almost all towns and suburbs outside of the major cities are now part of the eligible area for the relocation scholarship.

Students can test their eligibility for the Relocation Scholarship at Centrelink’s website, using a household income figure and their postcode.

Other family payments are being trimmed. The Baby Bonus will be cut by $437 to $5,000 from 1 September 2012, where it will stay, fixed until 2015. The Baby Bonus will continue to be paid in 13 fortnightly installments. The first big lump sum payment will be $846 followed by another 12 installments of $346 each, all in addition to other family payments from Centrelink.

All students can apply for the literally thousands of private and public sector scholarships now available through multiple channels. Many students leaving year 12 are now applying for more scholarships than university courses. The federal government’s MyFuture.gov.au website has lots of information for those considering their future careers and how to pay for their education.