What is happening in Australia?

Has open season been declared on single parents?

As the treasurer Joe Hockey draws up plans for more cuts to family benefits, no senior government figure is willing to condemn the insulting language directed at ‘non-traditional’ families from backbench Liberal Cory Bernadi.

Single parents – and mums in particular – seem to be directly in the sights of a double barrelled attack from the new Abbott government.

Parenting payments are expected to be scrutinised for savings this year.Family Tax Benefits will be cut heavily. The Schoolkids Bonus will be axed by the new senate in July.

Along with this assault on the bank accounts of single parents comes the language of disapproval – even outright vilification.

“Given the increasing number of ‘non-traditional’ families, there is a temptation to equate all family structures as being equal or relative,” wrote Cory Bernadi in recent book titled The Conservative Revolution..

” …why then the levels of criminality among boys and promiscuity among girls who are brought up in single-parent families, more often than not headed by a single mother?”

What the … what now? Are you even allowed to spout that kind of rubbish in Australia in 2014?

Well the prime minster Tony Abbott doesn’t seem too worried about Bernadi’s ideas. His office released a short statement last week saying Mr Bernadi was a backbencher and his views were his own. Case closed.

And yes – even in this age of politically correct language it is still quite OK to slander single mothers as a group – a fact learned by single mum Julie Foster from Sydney.

“Many single-parent households are not good places for children,” thundered Hirst.

“The mothers are given to junk food, daytime TV and no-good boyfriends, who might develop designs on an adolescent daughter.”

Yes. That was really published prominently in print and online by The Age and Sydney Morning Herald in 2013.

Outraged about the article, Julie put down her Big Mac and turned off the TV just long enough (lol) to shoot off an email to the NSW Anti-Discrimination Board. 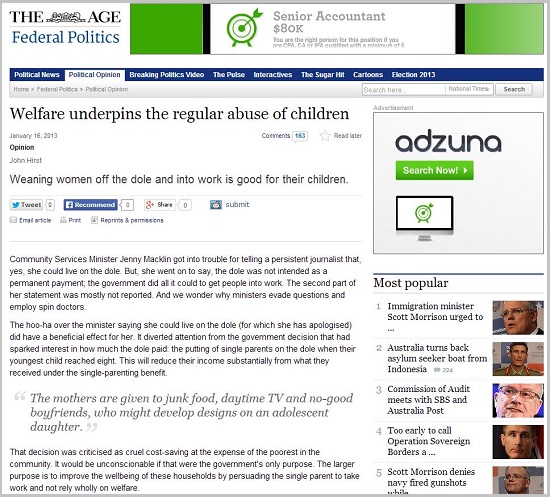 Julie told Singlemum that a woman from the Anti Discrimination Board phoned to explain that anti discrimination or anti-vilification laws do not apply to single mothers.

“They said you can’t claim that is discriminatory against you on the basis of marital status.”

Excuse me – what were you told?

“They said there is no such thing as vilification of single parents.”

Julie may or may not have complained to the correct agency but that doesn’t matter – the answer would be same anywhere said National Secretary of the Council of Civil Liberties, Cameron Murphy.

“Marital status is not covered by vilification laws.”

“There is absolutely no way to make a legal complaint,” said Murphy, “and that means it is really up to good people to challenge these ideas.”

“People might have a right to a point of view but that comes with the right to be challenged and hounded about those ideas.

“If people are preaching violence or discrimination of a group of people at law then the rest of us have to stand up and say it’s not on.

“I don’t want these ideas to become the basis for government policies,” said Murphy, “Parents have the hardest job in the world and single parents have even harder circumstances and they do a great job.

“Generations of children now have grown up in single parent households and gone on to leadership positions in business, the trades, politics and other areas.”

Workplace laws may ban discrimination by employers against employees on the basis of marriage status, but there is nothing stopping a church run organisation firing a single mother.

Recent attempts to end the loophole that allows churches to discriminate against employees who act in ways they don’t approve of ended in failure said Cameron Murphy.

“A lot of people like myself want better discrimination laws but it is a long hard road.”

Julie went ahead and edited the Hirst article, cutting the words single parent or single mother and replacing them with “immigrant” to prove her point that there were double standards at work here.

But to no avail. There is no basis to complain about vilification on the basis of marriage status. We would publish Julie’s edit of the Hirst article but we could be prosecuted under racial vilification laws.

“That whole newspaper article was a disgrace,” said Julie.

“It was atrocious and it was incendiary. It implied that we are all sitting on welfare getting drunk and taking drugs.

“I’m disgusted that The Age would publish such blatant misogynistic material and that it is OK to do so,” said Julie.

“Now some politicians are running an extreme right wing agenda against single parents and everyone who doesn’t fall into a traditional family unit,” said Julie.

“Just because you have a mum and a dad in the house doesn’t mean everything is necessarily hunky dory.”

Single mums have become a dog for everyone to kick wrote the University of Queensland’s Doctor Karen Brooks in Brisbane’s mainly pro-Abbott Courier Mail this week.

Bernadi has “taken a cheap shot” said Brooks “to sell his damned book.”

But there is a bigger problem with his comments – and the silence of the Prime Minister in response.

That politicians feel free to say these things shows just how ‘close to the surface’ prejudice against single mothers is in Australia said Brooks.

Quite a few single mothers have hit ourSingle Parent Facebook Forums to tell how Bernadi’s recent comments have apparently encouraged their friends and families to insult and even abuse them for being single.

Opposition leader Bill Shorten – a stepfather himself – said he was personally insulted by Bernadi’s writings. “Hundreds of thousands of Aussie kids thrive in single parent and other non-traditional families” said Shorten.

Labor and The Greens both called on the Prime Minister to condemn Bernadi’s views.

In the absence of legal protection from the hate speech now being directed at single mums, Cameron Murphy said it’s up to all of us to take up the fight.