Breakfast: Why is it the most important meal of the day?

You’ve heard the phrase, “breakfast, the most important meal of the day”, a thousand times or more I bet. I tell you what I’ve heard a thousand times, “I don’t eat breakfast”. Reasons given range from not having time, never hungry to “I feel sick at the thought of eating early in the morning”. 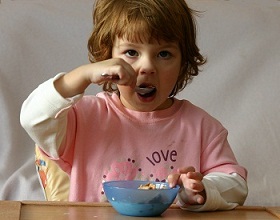 Lets break the word down. Break Fast ! It literally means to stop a period of fasting. The period being your nights sleep. Put logically, if you ate your last meal at 7 or 8 o’clock, then went to bed at 11 and slept till 7, you’ve gone 11 or twelve hours without eating or drinking anything. Would you do that during the day? I doubt many could, not without functioning inadequately I’m sure. So then imagine you’ve skipped breakfast and eaten at around 10 o’clock, builders breakfast time (I grew up working on building and construction sites, we wouldn’t stop till around 10 am after starting work at 8). That could be 14 or 15 hours without food. Over half the day!

Our body “runs” on our carbohydrate intake. These carbohydrates are broken down into glucose and is released into the bloodstream, known as blood sugar, which is circulated and used for our energy levels for all body systems, including muscles organs and brain function. Excess carbohydrates are converted into a substance call glycogen and stored in the liver and muscles as a short term fuel store or into fat, our long term fuel store. So, after a nights fasting our bodies are likely to be dipping into our short term energy reserves. If we further avoid eating for longer, and these stores run too low we can experience fatigue, nervousness, depression, headaches and digestive problems. This is all the more important to children, especially if they are of school age. A poorly balanced blood sugar can lead to difficulties in concentration, irritability and tendency to have behavioral problems.

So the ideal is to maintain a steady blood sugar level throughout the day the best we can. The way we do this is to address our carbohydrate intake and the types of carbohydrate we eat.

The speed in which food is broken down in the digestive tract into its available sugars is rated on some thing called the Glycaemic Index (GI). Each food is given a score up to 100. The higher the score, the faster they release their sugar into the bloodstream. Lower scores release their available sugars at a slower steady pace. The GI rating only applies to carbohydrates, animal products take longer to digest due to their protein and fat content so therefore will release their energy slowly and score low. Examples of low GI slow releasing foods include broccoli, peppers, green vegetable, tomato, apples, beans and pulses. Moderately rated are fruit juices, whole wheat pasta, brown rice and sweet potato. High scorers are things like white rice, bread and pasta, potatoes, soft drinks, sweets, cakes, jams, cornflakes and puffed rice cereals.

If we eat a high GI meal, the blood sugar levels rise rapidly, giving a sudden burst of energy. Which in the short term may be beneficial. But when the levels drop again, just as rapidly, this is when we experience fatigue, lack of concentration and irritability. It is times like this when we are more likely to reach for another sugary snack to boost our energy, starting the roller coaster ride all over again. As insulin in released to deal with our blood sugar levels, constant release of this hormone can initiate the release of type 2 diabetes (where the body cells become resistant to it). Something that is becoming more evident, even in our children. There is even evidence to suggest something even more sinister. Studies are available that point to an increase risk of certain types of cancer in people who eat constantly high GI meals. 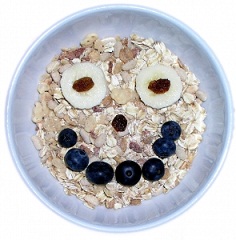 There are some simple rules to follow that can help us balance our blood sugar to give sustained energy levels throughout the day. Firstly don’t skip meals, that should now be self explanatory. Secondly choose meals that rate low or moderate on the GI tables (http://www.glycemicindex.com). Adding protein to carbohydrate will slow the release to glucose further, as we learned, proteins are slow to release their energy. Whole grains are also slow releasing foods, due their high fibre content. Fibre slows the release of sugar, which is why brown bread, pasta and rice are lower on the GI scale than their processed white equivalents.

So we’ve discussed why eating breakfast is the best way to start the day. Now what do we eat? You can wander around every supermarket in the land and see one or two (even three in the huge mega stores) aisles of “breakfast” cereals. Bright coloured boxes, with Monkeys, Tigers and action figures on them, maybe with a cheap plastic toy. If not the ones aimed at kids, the ones with a beautiful lady or adonis like guy on it, dressed in swim wear with a tape measure around his or her slender waist, aimed at us. The boxes are full of promises, can help weight loss (small print: as part of a calorie controlled diet), As well as huge banners advertising they are fortified with vitamins or contain extra added minerals such as iron. Now many state reduced or no added sugar, which tells me that they once were! Who decided that these products are your staple breakfast choice? Was it the governments health advisers? Was it the millions of parents out there who want to feed their children? No, in my opinion it was the manufacturers marketing department. These companies spend millions, even billions of pounds, dollars and euros advertising their products. TV advertising, posters, slogans and logos are thrust under our noses every minute of the day. And I think I know why they spend so much on media exposure. They are doing nothing more than using as much marketing power as possible to sell a product that is cheap to manufacture, that is has a high mark up and that really doesn’t hold that much nutritional benefit at all. Some brands contain as much sugar as a bar of chocolate but would you give your child a bar for breakfast? Maybe not, but if your youngster has a bowl of chocolate flavored cereal, you might as well be. These marketing campaigns have been engraved into our minds so that when we shop, we automatically put cereals on our lists for breakfast. As many or even most of the well known brands are high in sugar or ingredients that will spike the blood sugar, we need to retrain our thinking into good choices for breakfast that will sustain our energy levels, moods and concentration.

Start with the simple egg. A few years ago a poorly informed politician announced that eggs may contain salmonella and will raise cholesterol. Both myths. Eggs are a great source of protein and nutrients for brain health. Two scrambled or poached eggs on some whole grain toast is a great breakfast. If the kids are more adventurous, an omelette with diced peppers and onions or chopped left over veg from your sunday roast will increase the amount of vegetables the kids eat in the day.

Porridge oats are very slow releasing whole grain. Porridge made with low fat milk with berries and a generous dollop of natural unsweetened yoghurt is a great first meal of the day. A smoothie made with pineapple, kiwi, low fat milk and a cup of oats is delicious breakfast too.

Another whole grain that will help to start the day off well is Buckwheat. Try making some delicious pancakes with buckwheat and top with blended berries and yoghurt instead of jam.

A cooked breakfast again is fine. Don’t fry your food, rather grill your bacon (fat trimmed), tomatoes and mushrooms. Do your best to avoid sausages unless you’re sure of the origin. Most mass produced are little sacks of mystery, and contain more fat and gristle than good quality meats. Some whole grain toast and you have a nice hearty meal to set you off.

Wishing you the best of health. Dan 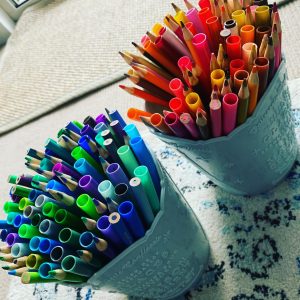