Bambi is going back into the Disney Vault

Bambi is a much-loved Walt Disney animated movie that has become a timeless family classic. First released in 1942, Bambi is currently available for home-purchase.

A testament to how good Bambi actually is, is proven by the movie’s huge and consistent popularity throughout the years – from generation to generation of children, all around the world.

Bambi is a beautiful coming of age story, and follows the life of a Bambi, an adorable baby deer. We witness Bambi’s life – from birth to adolescence and then adulthood.

Bambi steals your heart from the very start of the movie, from his hilarious very first attempts at walking, to his surprise at discovering rain drops! As Bambi explores his forest world with his mother, amongst the delights, there are also some scary and confronting moments, so it’s best for young children to watch Bambi together with a parent or carer. 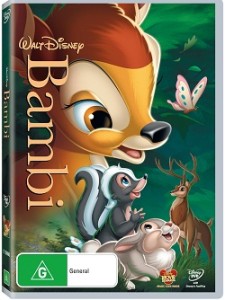 During his adventures, Bambi makes new and endearing friends, such as Thumper the rabbit, Flower the Skunk and Faline, his childhood friend and eventual life partner. Together they explore the world around them, taking the viewer on a wonderful journey into the life of a deer.

Though time and animated film technology has moved on over the decades, Bambi loses none of its charm and appeal when compared to modern animated movies. Disney achieved incredible feats of production excellence, and insisted upon portraying Bambi’s world accurately to a remarkable degree. The animation illustrators achieved their diligent attention to detail by studying real deer and other animals at the Disney studios (these animals were even named after the film characters, and were later released into wildlife parks). This process meant that Bambi took years to complete – much longer than several other Disney movies released around the same time in the late 1930s, early 1940s.

Bambi is a gentle, charming movie that enrapture both children and parents. It is still available for purchase on Blu-ray and DVD. But be quick – Bambi disappears back into the Disney Vault on 31 July 20